Home The Museums Supporting the Museums How to become a Friend

Of the original Stockwood House, only the stable block and nurseries remain, adjacent to the modern Discovery Centre. But until the early part of the 20th century Stockwood House had been one of the two major country houses situated in or near Luton (the other being Luton Hoo), and its owners included among Bedfordshire’s greatest landowners, with a very significant influence upon the development of Luton and the lives of its people.

Luton Council acquired Stockwood Park in 1945, and the house was used for several years as a hospital, before being demolished in 1964.

Since its six million pound revamp in 2007 Stockwood Discovery Centre has become the jewel in the crown of Luton Cultural Services Trust. Opened by Charlie Dimmock in 2008, Stockwood has attracted a higher number of visitors than predicted; it has also won a number of awards for its eco and environmentally friendly design.

The exhibition hall has been greatly increased in size to give much more exhibition space and conference facilities. All the Mossman carriages are on display, along with the two steam rollers, purchased and refurbished entirely by he friends.

A recent acquisition is a 1950’s Bedford truck, decorated in vibrant colours by a Pakistani truck artist and a British wagon artist. This form of truck decoration is unique to Pakistan and Luton’s truck is only one of two outside Pakistan, the other one is in the Smithsonian Institute in Washington DC.

The Discovery Garden includes a Sensory Garden, a World Garden, Islamic Garden and a Medicinal Garden. The period gardens have been lovingly restored, along with the Victorian Green Houses. The Improvement Garden designed by the late Hamilton Finlay, a Scottish poet, writer, artist and gardener; he took inspiration for his garden designs from French Romantic paintings and classic Greek sculpture. His garden at Stockwood is one of the largest he designed with the exception of his own five acre garden at Little Sparta in Scotland.

The Garden Café serves locally produced food and overlooks the sensory world and medicinal gardens. The Stable Block features a series of new galleries called the Discovery Galleries, these include, The Introduction Gallery, The Landscape and People Gallery, The Medieval Gallery and The Bagshawe Gallery of Rural Crafts.

Overlooking the stable block is the refurbished clock which was another project funded by the “Friends”. The new shop carries a wide variety of items and is the ideal place to finish a visit to Stockwood Discovery Centre. 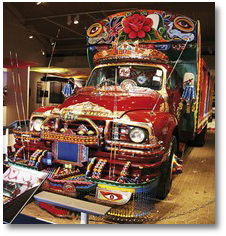 A small visual taster of what Stockwood Discovery Centre has to offer, and best of all entry is free, some travelling exhibitions you have to pay to see.